Roughly ten years ago I was invited to China. I became a ‘foreign expert’, the name the People’s Republic of China give to foreigners granted work visas, and over a three year period I spent time travelling and exploring some of the more remote regions of this vast country including Yunnan in the South West, Altai in the far Northwest, Xinjiang in the far west and the Tibetan Autonomous Region or what was formerly central southern Tibet bordering the Himalayas. All of these areas have traditions and cultural legacies that have produced fine weavings for thousands of years. My fascination was also due the opportunities they offer for trekking and contact with tribes of people who live pretty much as they have done since medieval times.

Above is a an East Turkestan silk carpet made up of two fragmented throne covers joined on the central vertical axis. After I sold this item in London it soon made its way into a major London auction http://www.christies.com/lotfinder/rugs-carpets/a-silk-kashgar-carpet-east-turkestan-late-5929112-details.aspx with an attribution to Kashgar, a small city on the Western fringes on the Taklamakan Desert in the Province of Xingjiang.

Today this region is the subject of much controversy owing to political issues concerning the indigenous population of Uighur people ( https://en.wikipedia.org/wiki/Uyghurs ) , of Turkic origin, who have found assimilation with an increasing ethnic Han Chinese population problematic.

With the Karakoram Mountains to the west, Altai and Mongolia to the north and east and India and Tibet to the south and east, this area has long been fiercely contested, even more so since large reserves of oil were discovered at the heart of the Tarim Basin in the 1950’s. Today’s desert nights are lit up with burning gas flaming high into skies that can be seen from a highway that dissects this arid region, connecting the cities of Khotan and Yarkand to Kashgar to the south with other oasis towns to the north. These three centres of carpet production have over the past centuries formed what is known as the silk route due to hidden riches which have been produced here since ancient times.

I visited a carpet factory on the edge of Khotan having travelled there from the town centre over a long bridge spanning a vast river of gleaming stones and shingle banks where groups of men, stripped to the waist, wrestled, ant-like, with huge lumps of gleaming white ‘mutton-fat’ jade washed down from the Kunlun Mountains bordering Tibet to the south. The girls in the factory were weaving coarse rugs echoing designs from other regions and countries.

In another part of the factory complex there was a display of textile related items that once made China notorious. I come from a region of the UK formerly made rich on the backs of sheep driven down from the hills and sheered to produce wool and lace exported worldwide. Here I was looking at a different process and instead of large bales of white puffy wool I saw tiny balls of white fluffy silk. These are produced by moth grubs feasting on mulberry leaves and used to make brocaded silk wares since times past. There were also complex looms for weaving the silken thread.

This painstaking enterprise was for centuries a fiercely guarded secret which helped to make China wealthy through exports.

Today a thriving mulberry tree grows in my garden in South West England, producing small, raspberry-like fruits. If you listen carefully when the wind blows the leaves almost seem to murmer…

In Kashgar I stayed at the former Russian Consulate, now a large mid-range hotel. Built in 1890 this building harks back to a time when Kashgar was at the centre of the ‘great game’ when Central Asia was at the centre of a long-fought power struggle between neighbouring powers. https://en.wikipedia.org/wiki/The_Great_Game

Indeed I felt much as Peter Fleming, an accomplished adventurer of the early twentieth century, must have felt having arrived from the then Peking seventy years before me. He was worn out and recovered as a guest of the British Consul having made the trip mostly on horseback and in disguise. At Khotan he crossed the river east of the town on horseback as the ferry would not carry animals:

‘We went on just before noon. The desert had ended, though the main oasis had not yet begun, and it was a green world through which we rode. As we approached Khotan Tuzun Ahun spoke darkly of a great river in flood, urging us to spend this night on the hither side and enter the city early the next day when waters, which are swollen towards noon by the melted snows, would be low. But we were not to be gainsaid a goal so nearly reached, and eventually, leaving Tuzun to bring on the submersible donkeys next day, we forded the Yurungkash. [ ] at last [ ] we rode into the first arm of the turgid yellow stream. Twenty minutes later we floundered out on the further shore; I had been almost completely immersed, and our sleeping bags (on which, in the Turki style, we rode) were soaking, but neither of us was any the worse for that.’ Fleming was seeking refuge with a British Government representative: ‘Past a surprising number of Union Jacks flown – an effective talisman- outside the premises of British Indian subjects in the bazaar. And at last into a long courtyard full of bales and cases from India, at the end of which steps led up into the aksakal’s garden. In the middle of the garden, under the susurrant mulberry trees, stood a pavilion without walls which looked exactly like a bandstand. In this we were lodged;’ (Pages 294/295 Jonathan Cape 1936) https://en.wikipedia.org/wiki/News_from_Tartary

Fleming continued on from Kashgar to what was then India and what is today Pakistan.  Today it is possible to travel to Pakistan via the Karakoram Highway through the Kunjerab and Khyber passes. I did not have a visa for Pakistan but followed the Karakoram highway up to Karakul Lake where I took these photos of a shepherdess

And some road workers fishing for minnows

I had used planes, trains and automobiles, stopping off along the way for brief forays into the interior with my own sleeping bag. Below is a local man near the Kazakhstan Border. His mother ran a small roadside restaurant. He is sitting on a highway marker stone that shows the distance in kilometres to Beijing on approximately the same latitude and within the same time-zone!

Before heading back east from Kashgar along the route from whence Fleming had arrived I managed to buy an early 20th Century carpet in a rug warehouse adjacent to the Main Market, famous for livestock and wool. Marco Polo refers to this trading centre when visiting in 1399:https://books.google.co.uk/books?id=9LGqCQAAQBAJ&pg=PA32&dq=kashgar+market&hl=en&sa=X&ved=0ahUKEwjS_fvAjt7KAhVCnA4KHfd1AUIQ6AEINDAC#v=onepage&q=kashgar%20market&f=fale

Having bought a carpet similar to this one

I went to the main post office and posted it back to the UK, under the watchful eye of Elvis Ablimit, a well known local guide, dealer and businessman who was keen to ascertain the price I had paid.

(The carpet arrived back in the UK over six months later than I did! It had been stored off-shore due to an embargo on Chinese goods! http://www.europeanchamber.com.cn/en/national-news/88/eu_s_mandelson_optimistic_about_china_textile_pact )

Mr Ablimit was not the only local resident I was honoured to meet. 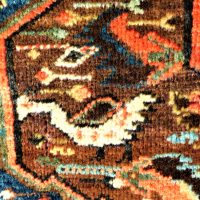 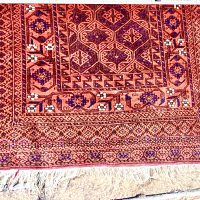